on aid worker's families & a distorted perception of the world 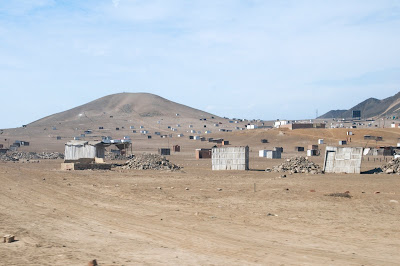 My eight year old niece says that Peru is a disorganized country:

It took her a whole two days to figure this out. yep, someone forgot to "organize" the wealth according to need.

This is something that aid workers' families have to deal with early on. When we lived in Cambodia my kids were still too small to understand why the children we passed on the street had shredded old clothes and no shoes. But we weren't, and some of the things you see, some of the things you have to live with, once you have your own children as comparison, become a lot harder to look at in the face.

Then there is the fact that your children grow up as part of a small, expatriate, rich elite, (by comparison, you are rich, even if you are not,) and are often separated from anyone that actually belongs to that country, and you have to wonder what that does to your kids’ self identity and interpretation of the world. Although many people try to fight this, promoting that their children play with the neighborhood kids, it is not always, easy, first, you will often not share the same neighborhoods as the locals, be it for practical or safety reasons. Your kids will not always be able to speak the local language, and even when all these things can be ignored, you have to wonder what it might feel like to be one of those kids and be invited into the bedroom of your child, filled to the brim with new shiny toys. Hard as some of us may try, it is an impossible friendship almost for sure destined for failure.

It is not so different as an adult. I grew up traveling myself, but my parents always made a point of putting us in a local school so that we would form part of the local community as opposed to the expatriate one. I learned to speak English, in a fourth grade classroom in New Jersey. But unlike in the business world, the places we get posted to don't necessarily have local schools that have the quality I feel we owe to our children so that some day they will be able to access top western universities. They are in languages like khmer or Dutch which are not really very practical, nor is it realistic, (or fair,) to expect that your children will be learning a new language every 5 years.

I started working for the UN in South America, which is not only a language I already mastered (as my own mother tongue), but is also where my family is from, and where I had lived for part of my childhood. Integration should have been easy, and it might have been had I gone there with a business, but in the development sector there are wide differences between the benefits, (and sacrifices,) that are expected from the national staff and the international staff. To start off, my colleagues had a life, a family and friends they had grown up with, so it didn’t always occur to them that the new comer knew no one in town, and that when they bid me farewell on Friday I would speak to no other adult until the next Monday. Small towns promote integration, big cities don’t. But more to the point, when they did start integrating me, inviting me to their homes, and I reciprocated by inviting them to mine, somewhere down the line someone would always make a snark remark about how the young new kid in town earned more than most of the local staff, even if they had been working there for years. They came to my room, saw my new shiny shiny toys and resented me for it.

It isn’t always like this of course. Some destinations make it easier to integrate than others as well. But for the most part, you end up accepting what at the outset of your career was unthinkable: that you cannot really integrate, why? Simple, you are different. In wealth, but also in background, interests and needs, and with time it just becomes so much easier to make friends with the other expatriates who have similar background and issues. They understand what your life is about, what the challenges are, and it means that when you have to start your life over from scratch, at least you have that gained.

This even happens when you get posted to HQ duty stations. We currently live in Holland, Europe (where both my hubs and I mostly grew up), and everyone speaks English. All the issues around wealth are gone, but still, my youngest goes to a British crèche, and although the oldest attends a Dutch school, she goes to the international class which is imparted in English. Why? Because we are not staying, because she already speaks three languages, and because Dutch is not very useful (trust me, if it were Chinese or Arabic she’d be learning it, we would all be.) I work from home, and my hubs is in an IGO, which means that we actually had more Dutch friends in Cambodia than we do here, and again, you have to wonder what that is doing to your child’s perception of the world.

Give them an open mind and sensibility towards the people that do not have what they do have....for starters....or maybe they will continue on the same path as you and your husband did.

Thank you for articulating so fluidly some of the tensions of the expatriate life. You raise some excellent points about the desire to integrate and the barriers that keep us from doing so. Having started off as an expat with no kids, I am now the mother of two daughters, and I agree that these issues and questions have different implications when we are raising kids overseas. A Third Culture Kid myself (as it sounds like you are as well), I’d like to think that growing up in a developing country will give my daughters a greater awareness of and sensitivity to issues such as inequality, injustice, and diversity – even if they experience much of the aforementioned developing country from within an expat bubble. There really are no easy answers – but it’s comforting to know, through your writing, that it’s a common issue faced by many.

I wish I had had an infancy like your children!